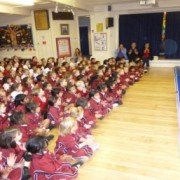 Commonwealth medal winning gymnast Danny Lawrence vaulted, sprang and tumbled into Seaton House recently to spend the day talking about his career and putting the girls of Junior House and Senior House through their gymnastic paces!

Danny, who competed in the European Championships in Greece, the World Championships in Denmark and who won a silver medal at the 2010 Commonwealth Games in Delhi, put on his own stunning and impressive gymnastic display before organising the girls (and some members of staff!) into groups for energetic circuit training around the School Hall.

His visit was part of the ‘Sports for Schools’ project encouraging young people to think about taking up a sporting activity and the benefits that can be derived from physical participation in both individual and team pursuits.

“Inviting a dedicated athlete to Seaton House made a huge impact on the girls and the resulting enthusiasm has encouraged many of them, regardless of their personal ability, to take part and try to achieve personal sporting goals. It was an exhausting but exhilarating day for everyone!”