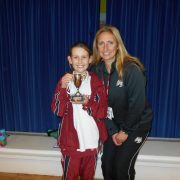 This week we were lucky to be visited by Natalie Swift, ex England Netball and Super League Player who came to Seaton House to give our pupils a netball coaching session. After the training sessions she stayed to umpire the House Netball Tournament.  Congratulations to York House who won the House Cup.